The cumulative advance tax collection, comprising both corporation and personal, has surged 12.83 per cent to Rs 5.21 trillion against Rs 4.62 trillion a year ago, according to the data released by the Central Board of Direct Taxes (CBDT) on Sunday.


Of the total, the corporation advance tax mop-up between April 1 and December 17 stood at Rs 3.97 trillion. The advance personal income tax collection, on the other hand, stood at Rs 1.23 trillion. 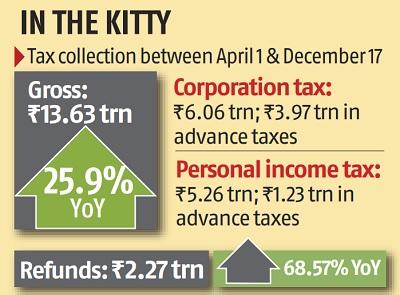 After adjusting for refunds, the net direct tax collection for the current fiscal year, so far, grew 19.81 per cent to over Rs 11.35 trillion between April 1 and December 17, from Rs 9.47 trillion a year ago. The figure is about 80 per cent of the full-year Budget target; the government had set a target of Rs 14.2 trillion for direct tax receipts.


This included the corporation tax collection of Rs 6.06 trillion and the personal income tax, including securities transaction tax (STT), mop-up of over Rs 5.26 trillion. Gross collection (before adjusting for refunds) for the ongoing fiscal year was up 25.9 per cent to over Rs 13.63 trillion, from Rs 10.83 trillion a year ago.


“Refunds aggregating to over Rs 2.27 trillion have been issued in the current fiscal year against refunds of Rs 1.35 trillion issued a year ago — a growth of 68.57 per cent… There has been a remarkable increase in the speed of processing of income tax returns filed during the current fiscal (year), with almost 96.5 per cent of the duly verified ITRs having been processed during the period,” the CBDT said.