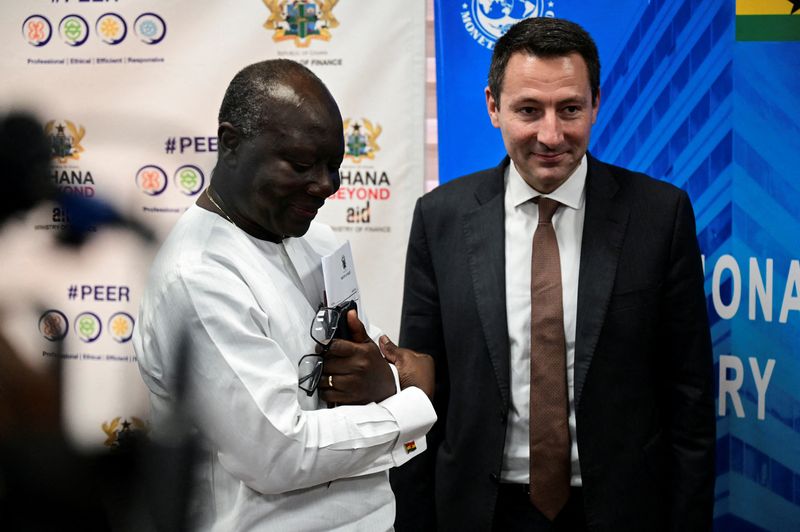 JOHANNESBURG (Reuters) – Days after launching a bold domestic bond overhaul, Ghana struck a $3 billion loan deal with the International Monetary Fund in a quest to steady its debt-laden economy, but domestic resistance to the bond revamp threatens to stall that effort.

The west African nation has become the latest among a number of smaller emerging markets from Sri Lanka to Zambia to buckle under its debt burden as the economic fallout from COVID-19 and Russia’s war in Ukraine fuelled inflation and borrowing costs around the globe.

The to-do-list for Ghana’s embattled government is long: pushing through a domestic debt exchange without upending its financial system, negotiating restructuring $13 billion in international bonds and executing spending cuts and tax rises.

Overseas investors have welcomed both the local debt exchange – which aims to swap bonds for longer maturities, cut interest rates and pause interest payments until 2024 – and the IMF deal, which still requires board approval, to help address Ghana’s worst economic crisis in a generation.

“This is the right first step in this process … the local debt service has been way too high for too long,” Joe Delvaux at Europe’s largest asset manager Amundi told Reuters. “The outcome for the (IMF deal) is another positive step, albeit we are still at the early stages in the restructuring process.”

Ghana’s slide from investor darling into debt distress has been a swift one. It sold $3 billion of Eurobonds in spring 2021 in a two times oversubscribed auction.

Just over a year later, the government – rattled by violent street protests, inflation that has now soared above 50% and the currency plunging three-fifths against the dollar this year before a partial recovery in December – came knocking at the IMF’s door.

There is no doubt Ghana needs a debt rework.

According to Finance Minister Ken Ofori-Atta interest payments are now consuming 70%-100% of government revenues while the public debt-to-GDP ratio had soared above 100%.

But the latest steps to mend Ghana’s finances have met resistance inside the country.

Under the debt swap plan announced last week, local bond holders, including Ghanaian banks, asset managers and insurance companies, have until Dec. 19 to swap 137.3 billion cedis ($14.3 billion) worth of over 60 domestic bonds for four new ones.

As an incentive, participating banks – which hold a third of government bonds – were offered relief measures. A $1.2-billion financial stability fund is also being set up.

But these measures have so far failed to convince bondholders they will make up for what JP Morgan analysts estimate will be a 50% net present value loss.

Both the Ghana Securities Industry Association and the Chamber of Corporate Trustees, a pension lobby group, rejected the offer in its present form.

Carrying out a local debt restructuring alongside an external one – as was the case in Argentina in 2020 or Barbados in 2018 – should in theory ease pressure for larger write-downs on external bonds.

“If the debt exchange is successful, it will provide significant fiscal space,” Anders Faergemann, a portfolio manager at PineBridge Asset Management told Reuters.

Full participation could help the government save as much as an equivalent of 8% of GDP in 2023, Barclays (LON:) analyst Michael Kafe calculated. Cashflow savings could total $7.1 billion between 2023-2028, Morgan Stanley (NYSE:)’s Neville Mandimika told clients in a note.

But incentives in the form of large liquidity injections into banks and other institutions, could erode those savings.

Ayomide Mejabi at JPMorgan (NYSE:) also said initial resistance meant domestic restructuring could be protracted, which might delay the start of the external debt operation, something the IMF has demanded and Ofori-Atta has pledged to announce soon.

Even that may not be enough, said Carlos de Sousa, a portfolio manager at Vontobel.

“Crucially, fiscal policy has to be adjusted very significantly, otherwise the benefits of the restructurings would be gone in a few years,” de Sousa said.