BMW’s discontinued i3 is already an EV cult classic

When BMW launched its electric-hatchback i3 in 2013, it was the carmaker’s first ever mass-produced fully electric vehicle. A quirky little car, with four seats, rear-hinged back doors and a frame made from carbon fibre-reinforced plastic, the i3 stood dramatically apart from the rest of the brand’s lineup. This was by design. BMW wasn’t trying to convince its core customers to abandon their sporty sedans and roomy SUVs — the goal was to entice early EV adopters to give the German automaker a try.

The plan worked perhaps too well.

When the i3 started popping up on US dealership lots, BMW loyalists largely ignored it, while new customers came looking for the car. By 2021 the company was ready to refocus on its core customers, and set a goal of making 50% of all BMW sales EVs by 2030. In January 2022, BMW said it would stop production of the i3 entirely, instead leaning into larger, longer range EV options like the i4 and iX — cars meant to look like the brand’s other models.

Over the i3’s nine years on the market in the US, slightly more than half of sales went to first-time BMW buyers. But it sold fewer than 50,000 units, according to data from Edmunds, often at steep discounts.

“Electrification became something different,” BMW design lead Domagoj Dukec told Bloomberg last year. “You don’t reach just for these early adopters. You have to reach for the customer base that’s been buying BMWs for generations.” 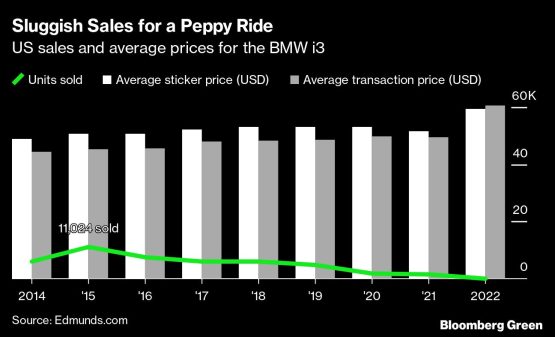 A similar dynamic is playing out across much of the industry.

As legacy carmakers bring electric models to the mainstream, they are aiming to minimise the disruption for consumers by offering big, rangy vehicles. While the strategy is arguably a necessary step in moving US drivers away from combustion engines, it’s an inefficient way to deploy the costly, heavy lithium-ion batteries that power EVs. It’s also a bittersweet moment for those who’ve come to love some of the little, lightweight models that are disappearing from the market.

Few little EVs are as beloved as the i3. Over a production run of more than 250,000 vehicles globally, the car has built a devoted following of owners who appreciate its distinctive style, surprising performance, just-enough range and bargain prices. In online forums, these drivers give their cars animal names — the black-and-white model is a “panda;” the gray, a “dolphin” — and talk about them in terms usually reserved for pets, children or even romantic partners.

Jim Neil bought his i3 on a whim seven years ago. A 74-year-old retired computer scientist in Melbourne, Florida, Neil had taken his previous car, a Toyota Prius, to the dealership for service but left in a huff when they refused to fix a problem with burning oil. On his way home, he decided to go car shopping. First, he test drove a Nissan Leaf and didn’t like it. Then he stopped at the BMW dealership.

“I was just going to drive past it because I never considered myself to be a BMW kind of guy,” he recalls. “But they had four or five of these things lined up in front of the dealership in a row and it just caught my attention.”

After one trip behind the wheel, Neil was sold by the car’s quiet, smooth acceleration — he bought it on the spot. “It was like nothing I’d ever driven before. It was just insanely fun,” he says. “To this day, when I get out of that car, I have to turn around and look at it.”

Neil’s i3 has a “range extender” — an optional two-gallon, two-cylinder gas engine known as “the Rex” among owners — but he rarely needs more than the 80 or so miles of range that the battery provides. Occasionally he makes a 130-mile drive to visit his daughter near Tampa, and for this he sometimes tries to “hyper-mile”: driving slowly on backroads to maximize range. He once made it 114.2 miles, he says, before the Rex kicked in. 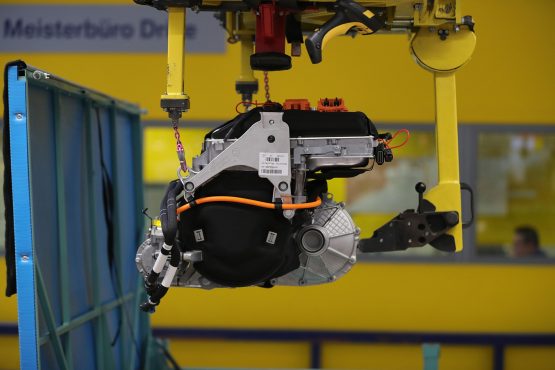 An electric motor for a BMW i3 hangs from a winch on the assembly line at a factory in Leipzig, Germany. Photographer: Krisztian Bocsi/Bloomberg

David Slutzky, founder and CEO of Fermata Energy, which supplies Vehicle-to-Grid (V2G) systems that allow electric vehicles to feed power back to utilities, is a self-described EV “zealot.” Now 67, he’s been driving electric cars since before Tesla made its first Roadster, owns a 2000 Ford Ranger EV with its original nickel metal hydride battery and once converted a combustion engine Subaru Outback to electric. Fermata owns a small fleet of Nissan Leafs, but Slutzky’s daily driver is a 2015 BMW i3.

He got the car in 2017, taking over the lease from a previous owner. The plan was to drive it for six months — on trips to and from his office in Charlottesville, Virginia, and for local errands — until Nissan came out with a new longer-range Leaf model. But when the time came, he wasn’t ready to let go.

“I just fell in love with the car,” he says. “I’ve had lots of good cars, and this is the best driving car that I’ve ever had.” EVs, as a rule, have a low center of gravity from the weight of their batteries and instant torque from their electric motors. But Slutzsky says the i3 handles extraordinarily well, even by EV standards.

Alex Knechel bought his i3 after gasoline prices spiked earlier this year. In March, he purchased a used 2016 model — a former government fleet vehicle with 14,000 miles on it — from the online marketplace Carvana for about $18,000. The monthly payment is lower than what he was shelling out for gasoline every few weeks.

“When I first got it, my coworker was like, ‘Cool toy car, bro,’” says Knechel, a 38-year-old wine merchant in central New Jersey. “It is actually really adorable. It grew on me. It’s futuristic and has cool lines and this little stubby face thing going on.” It’s also every bit as quick as his previous car, a BMW 1 series sedan. “I definitely smoke Camaros and Mustangs regularly.”

On a warm day, Knechel says, the battery provides about 80 miles of range, more than enough for his 46-mile round-trip commute. On cold days, he sometimes cuts it close, arriving home with about five miles to spare. For longer trips or those involving all three of his daughters, he’ll swap cars with his wife, who drives a Subaru Ascent that Knechel calls the “eight-seater monster truck.”

The i3 pairs well with such larger vehicles. Leon Braginski, a 52-year-old software engineer, also keeps an i3 and Subaru Ascent in the family driveway in Bellevue, Washington. The i3 handles school drop-offs for his two teenage children and other daily trips around town, while the Ascent tackles ski trips and bigger family outings. “It’s a very good combination,” Braginski says. “It actually fits in the garage nicely too.”

Like Knechel, Braginski was looking to save on driving costs when he bought his first used i3, a 2017 model with the range extender, two years ago. Earlier this year, he replaced it with a 2019 pure electric model. In both cases, Braginski bought used i3s from a BMW dealership, paying tens of thousands of dollars less than the original sticker price. It’s a trick he would like to keep pulling, though it will be hard as new stock dries up.

Laycee Schmidtke, an industry consultant who reviews EVs under the name Miss GoElectric on YouTube, was part of the experiential marketing team for BMW in the US in 2016. She led hundreds of test drives on city streets and closed courses, usually with first-time EV drivers . Most were astonished, she says, by the i3’s roomy interior and off-the-line torque.

Schmidtke was likewise impressed by i3’s quiet power, so much so that she decided to shift her career focus from ultra luxury cars to EVs. “It’s sad to see the i3 era conclude. Bold and quirky products like it raise the standards across the board,” she says, adding that “it’s important to have entry-level EV options even in the luxury segment.” Schmidtke would have liked to see BMW announce an i3 replacement before discontinuing it.

In an email, BMW spokesperson Phil DiIanni says the i3 was a “starting point” for its EV offerings, and iterating on it taught the company a lot. There is no direct successor planned for the i3, Dilanni says, but “in a sense, you could say that the current BMW i4, iX and i7 are all successors.”

Over time, the sunsetting of the i3 may send its superfans into the arms of other BMW models — or just as likely, cheaper models from other carmakers. Knechel, who prefers to buy used, would love one of BMW’s new iX electric SUVs if he could handle the price tag, while Slutzky is likely to return to the Nissan Leaf for his next car.

Neil, too, is sad to see the i3 go — but feels its short lifespan only adds to the car’s cool. He compares it to the BMW Isetta, an egg-shaped microcar with a refrigerator-style front door that the automaker made in the late 1950s and early 60s. “I think the i3 will be a curiosity 50 years from now,” Neil says.

In the meantime, though, he has no plans to say goodbye to his i3. Neil has been doing research online and says he may have found a way to replace the battery himself when the car reaches its end of life. “I think I can make it all work,” he says. “I’m going to live to be 128 and I’ll be driving my BMW i3 around all day long.”