Dogecoin Continues To Bleed, Sheds Another 10% In Last 24 Hours

Dogecoin has shed another 10% in value during the last 24 hours, as the memecoin continues its recent trend of decline.

Dogecoin Continues To See Red Days, Coin Now Down 9% Over The Last Month

With all the recent FUD going around the market, like the auditor of Binance’s Proof-of-Reserves, Mazars, pausing work for all its clients, the cryptocurrency sector has been bleeding hard during the past day. Dogecoin, the largest memecoin, has been no exception, much to the dismay of its investors.

At the time of writing, DOGE is trading around $0.0775, down 10% in the last 24 hours. Here is a chart that shows how the crypto’s price has changed during the last month: 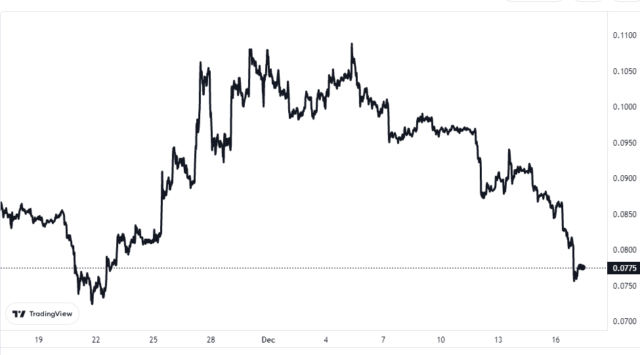 As you can see in the above graph, Dogecoin was rallying between late November to early December, breaking above the $0.10 level in the process, and giving investors hope that the memecoin can continue the run and recover its losses from the crash due to crypto exchange FTX’s collapse.

However, in the last couple of weeks or so, the trend has reversed and the coin’s price has been going down instead. The past two days, especially, have been brutal for DOGE holders. Following this most recent drawdown, the weekly returns of the original memecoin now stand at around 20% into the red. For comparison, rival coin Shiba Inu (SHIB) is down only 11% in this period.

In terms of the monthly performance, however, Dogecoin investors are slightly less underwater than its cousin’s holders, as they are around 10% in loss as compared to SHIB’s 12%.

Though, despite DOGE’s bad performance recently, the crypto is still firmly in charge of its place as the 8th largest coin by market cap in the cryptocurrency sector, as the below table displays.

The difference between Dogecoin’s market cap and that of the coin next in line, Cardano (ADA), is more than $1 billion currently.

One consolation for Dogecoin investors might be that a whale has been spotted transferring out 81,396,088 DOGE (about $6.5 million) from the crypto exchange Binance to a personal wallet, as per data from Whale Alert. 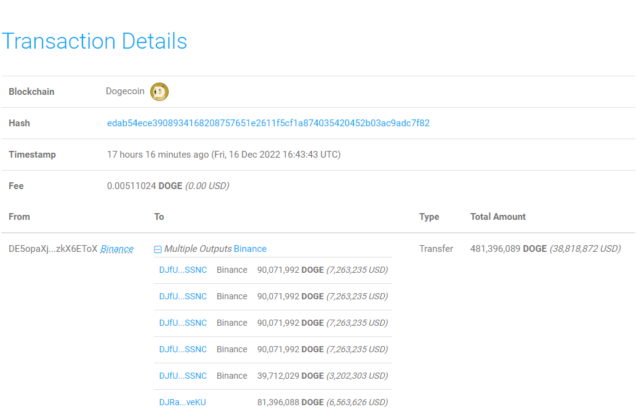 Usually, investors withdraw to personal wallets from exchanges for accumulation purposes, so this transaction could be a sign that the whale is interested in buying Dogecoin while the prices are down. Such a sign may prove to be constructive for the memecoin’s value.