Allen Weisselberg, a former top executive in Donald Trump’s business empire who pleaded guilty to committing tax fraud by accepting $1.8mn in “off the books” perks, has been sentenced to five months in jail.

The former chief financial officer at the Trump Organization admitted in August to keeping details of his company-paid New York apartment and luxury cars from tax authorities over 15 years.

The crimes to which he pleaded guilty carried a maximum combined sentence of about 15 years, but Manhattan prosecutors offered Weisselberg a reduced sentence if he testified truthfully against his former employer in a related criminal case.

The Trump Organization was convicted on 17 counts of tax fraud in December, following a trial in which Weisselberg was the primary witness.

The 75-year-old fought back tears as he testified during trial that he had acted out of personal greed, but also confirmed that his pay arrangement at the business had been “convenient for the company”.

Prosecutors showed a lease signed by Trump for an Upper West Side riverside apartment in which Weisselberg and his wife lived from 2005. The rent was paid by the Trump Organization, as was the private tuition for two of Weisselberg’s grandchildren.

Weisselberg testified that such practices were quickly abandoned at the Trump Organization once Trump was elected president, and that a “clean-up process” was undertaken to “make sure we correct everything”.

“Mr Weisselberg described in detail the way in which the tax evasion scheme was conducted . . . at the Trump Organization,” prosecutor Susan Hoffinger told the court on Tuesday.

Under examination, he “provided significant testimony about his culpability . . . and the benefits that were afforded” to the Trump Organization, she added, asking the judge to impose a six-month sentence.

The court had promised a five month sentence, and Weisselberg’s lawyer Nicholas Gravante asked if that could be further reduced.

“Each month makes a big difference when you are 75-years-old,” he said, and asked if his client, who was “in far from perfect health” could serve half of his sentence under house arrest.

Judge Juan Manuel Merchan was not persuaded, and said he would have imposed a harsher sentence because the court found some of the revelations about Weisselberg’s conduct to be “so offensive”.

In particular, Merchan said a $6,000 payroll payment to Weisselberg’s wife in order to allow her to contribute to social security, and “one day receive benefits to which she was not entitled”, was indicative of the greed of the convicted executive, who earned a seven-figure salary.

Weisselberg, who worked for the Trump family in a number of roles since 1973, will serve his five month sentence on Rikers Island, where 19 inmates died in 2022. He will also serve five years’ probation and has already returned more than $2mn to the state. 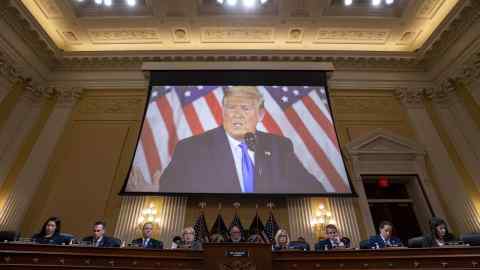 Dressed in a green fleece and wearing a blue mask, he added just one sentence to his lawyer’s arguments, saying: “I think the words expressed by Mr Gravante express my thoughts and feelings.” Weisselberg was immediately remanded into custody and will begin serving his sentence on Tuesday.

“In Manhattan, you have to play by the rules no matter who you are or who you work for,” Manhattan district attorney Alvin Bragg said in a statement following sentencing.

“These consequential felony convictions put on full display the inner workings of former President Trump’s companies and its CFO’s actions,” added Bragg, who inherited the case against Weisselberg from his predecessor Cyrus Vance.

The Trump Organization is due to be sentenced on Friday. It is unlikely to be fined much more than $1mn, but could face difficulties getting loans, making deals and obtaining or maintaining government contracts.

The company, as well as Trump, face separate civil charges brought by the New York attorney-general, who accuses the former president and his entities of inflating the value of crucial assets.

Lawyers for Trump have called both proceedings a “witch-hunt”.