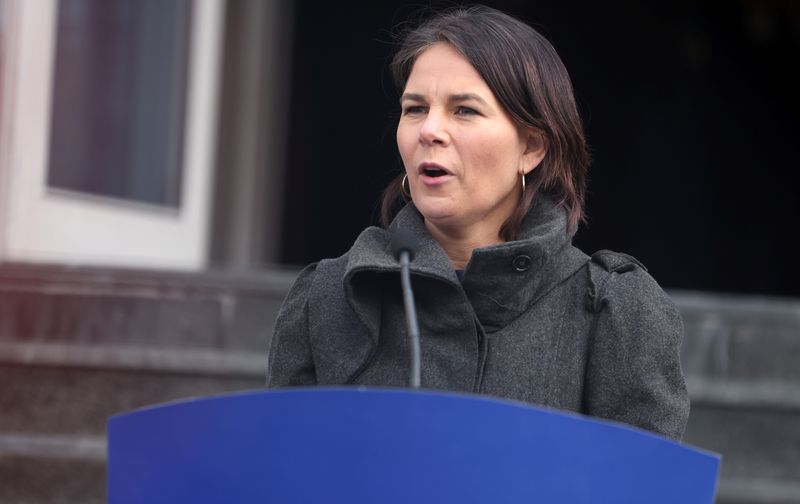 (Reuters) -Germany’s Foreign Minister Annalena Baerbock made a surprise visit to the eastern Ukrainian city of Kharkiv near the Russian border on Tuesday, promising more weapons as well as “concrete offers” to help Ukraine join the European Union.

In a statement ahead of a meeting with Foreign Minister Dmytro Kuleba, Baerbock expressed Germany’s solidarity with Ukrainians living through Russia’s invasion and harsh winter conditions.

“This city is a symbol of the absolute insanity of the Russian war of aggression in Ukraine and of the endless suffering that people, especially here in the east of the country, are confronted with every day,” she said.

After Germany last week promised to send Marder fighting vehicles to Ukraine as part of increased military support, Baerbock promised more weapons, without specifying which ones.

“In Kharkiv we can see the courage, the resilience and therefore the hope for a life in peace,” Baerbock told a press conference after her arrival.

Kuleba repeated Ukraine’s longstanding call for tanks and said he had no doubt that Berlin would eventually give Kyiv the coveted Leopard 2 tanks.

“I think that the German government also understands somewhere deep in its soul that this decision will be approved and the tanks will be given to Ukraine,” he said.

Kuleba added that foot-dragging on the issue was costing lives but also thanked his German counterpart for the aid so far.

Baerbock also said it was important not to lose sight of Ukraine’s place in Europe and its desire to join the EU.

“We as the government want to make very concrete offers to Ukraine in order to make progress in strengthening the rule of law, independent institutions and the fight against corruption, as well as in aligning with EU standards,” she said.