Revenue of the auto major expanded 24.9 per cent to Rs 29,044.3 crore, according to a regulatory filing.

According to Zee Business research, Maruti Suzuki’s quarterly net profit was estimated at Rs 1,922 crore and revenue at Rs 27,379 crore.

The company’s margin — a key measure of profitability — improved by 310 basis points to 9.8 per cent compared with the year-ago period.

Maruti Suzuki shares extended intraday gains after the earnings announcement, rising by as much as Rs 251.8 or three per cent to Rs 8,675 apiece on BSE. 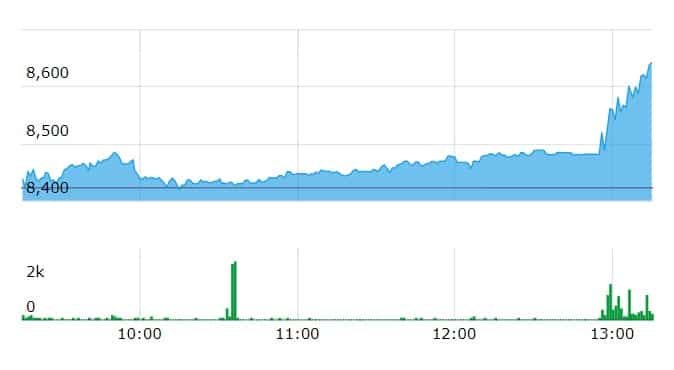 The company reported an operating profit of Rs 2,123 crore for the December quarter, up 2.3 times compared with the year-ago period, according to a company statement.

Total sales during the quarter stood at 4,65,911 vehicles, comprising domestic sales of 4,03,929 vehicles and exports of 61,982 vehicles, as shortage of electronic components impacted production by about 46,000 vehicles, Maruti Suzuki said.

As of December 31, Maruti Suzuki’s pending customer orders stood at about 3,63,000 vehicles, out of which, about 1,19,000 orders were for its newly-launched models, according to the statement.