Shruti Haasan drops a happy PIC with Santanu Hazarika; Says ‘no one makes me laugh like you’

Shruti Haasan and Santanu Hazarika are the happiest couples right now and we all can agree that these two have rightfully earned this title. Whenever they come together, on social media or otherwise, fans cannot help but adore this couple. The actress, who is super active on social media, shared an adorable pic with her beau Santanu Hazarika and the caption totally caught our attention as well.

Shruti Haasan took to her Instagram story and shared a monochrome pic posing with Santanu Hazarika, flaunting a huge smile. The credit for that big and happy smile goes to her beau. She captioned the pic, “You make me (laugh emoticons) like nobody else in this world.”

In the pic, clad in Balck dress, Shruti is seen looking at Santanu with a huge smile on her face. The two seem to be completely lost in each other’s smiles and their happiness is quite visible. Total couple goals. 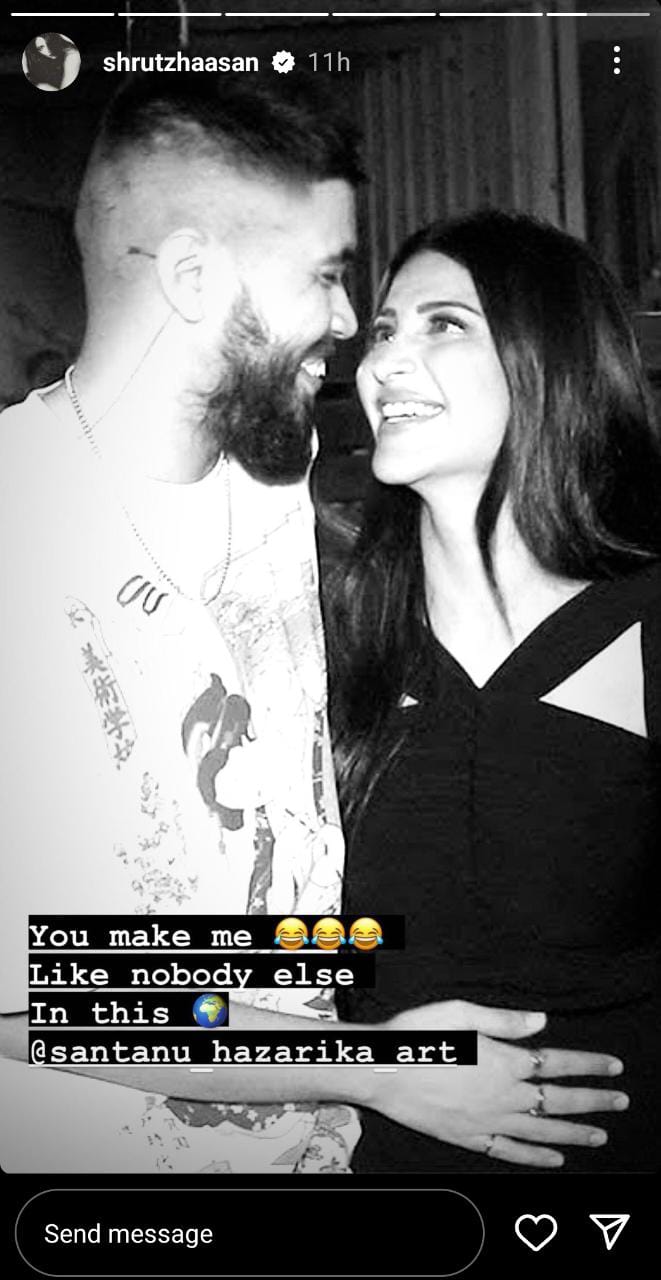 On Thursday night, Shruti Haasan took to her social media handles and reacted to the reports of her not attending the pre-release event of Waltair Veerayya due to ‘mental problems’. The actress shared several screenshots of media reports that claimed she has mental problems and is undergoing treatment. On Twitter, she just slammed the baseless reports and wrote, “Nice try !! And Thankyou I’m recovering well from my viral fever.”

Meanwhile, on the work front, Shruti Haasan is basking in the success of her recently released films Balakrishna starrer Veera Simha Reddy and Chrianjeevi starrer Waitair Veerayya. The actress was the leading lady in both films. Veera Simha Reddy and Waitair Veerayya clashed at the box office as Sankranthi was released and impressed the audiences.

She will be seen next alongside Prabhas in Prashanth Neel’s forthcoming action flick, Salaar. Produced by Vijay Kiragandur under the banner of Hombale Films, the drama will also have Jagapathi Babu, Madhu Guruswamy, and Easwari Rao in key roles.