Why Crypto Altcoins Started 2023 With A Bang

All across the brutally beaten crypto market, altcoins are beginning to show their first signs of a potential recovery following a nearly 90% drawdown in most assets. But could the recovery be due to a calendar-based phenomenon called the January effect?

Crypto Altcoins Explode To Start Off The New Year

Take a look at CoinMarketCap’s top crypto gainers and losers over the last seven days, and the returns from many top altcoins are reminiscent of the previous bull market in Bitcoin and other coins.

GALA, for example, tops the list with 138% growth in the last week. Lido DAO is right behind with 61% in a week. Dozens of altcoins have surged 20% or more in the same timeframe. Even specific altcoins caught up in the FTX-related fallout, such as Solana, have posted the largest monthly bullish candle since August 2021.

January, and 2023, are off to quite the start for anyone daring enough to buy the dip. But why exactly are altcoins experiencing such strong performance relative to Bitcoin or Ethereum, which have climbed roughly 5 and 10% during the same timeframe?

The answer could be something called the “January effect” – a calendar effect that takes place during the month of January. Other calendar effects in financial markets include “sell in May and go away,” the Halloween effect, the July effect, and the Santa Claus rally. 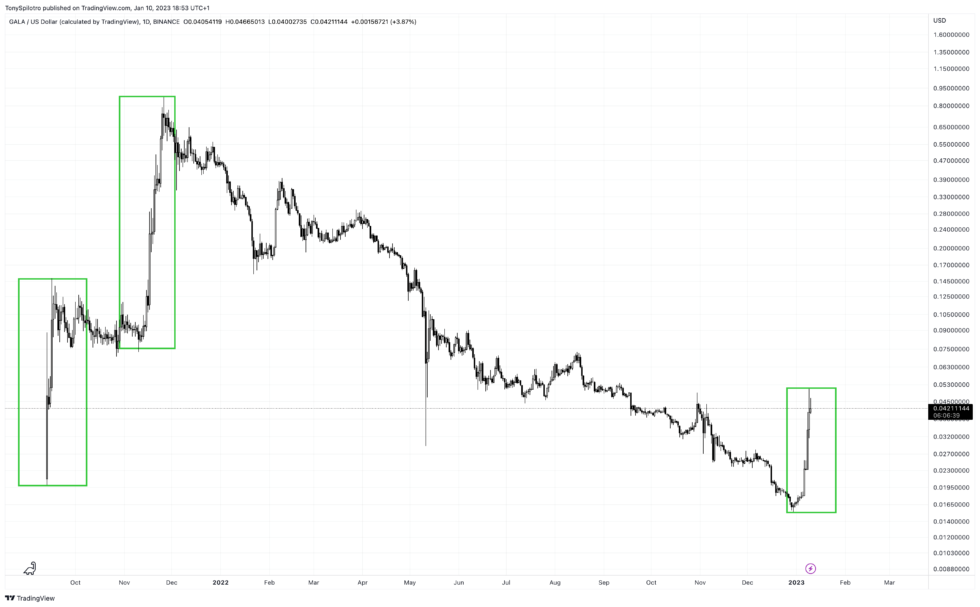 What Is The January Effect?

According to Wikipedia’s entry on the subject, the January effect is a “hypothesis that there is a seasonal anomaly in the financial market where securities’ prices increase in the month of January more than in any other month.” Simply put, there is potential for some assets to perform in January more so than the rest of the entire year ahead.

The phenomenon was first spotted as far back as 1942 by investment banker Sidney B. Wachtel. Watchel noticed that small cap stocks outperformed the rest of the market for January – with most of the returns arriving before mid-way through the month. Watchel also noted that for whatever reason, the third-year of a President’s term in a Presidential cycle would provide the greatest returns of all.

Investopedia asserts that the increase in buying activity is due to investors buying small cap assets back after performing year-end tax-loss harvesting following a price drop. This is a common practice for higher net worth investors who are seeking to maximize all possible tax benefits. Even Bitcoin bull and MicroStrategy front man took advantage of some tax-loss harvesting due to his BTC holdings sitting at a loss.

Smaller altcoins, considering the lower volume and liquidity profile, react much more potently to the switch from year-end selling, to new year buying enthusiasm. Another possible reason is due to investors first rolling out a new investment plan starting in a new year.

Whatever the reason, considering how far many altcoins have climbed, this January is currently leaning in favor of proving this phenomenon accurate. Whether this should be expected, or is due to the downtrend combined with the third year of the Biden US Presidency, remains to be seen.

Considering most data suggests that the party ends a little early at around mid-month, altcoins could have another few days to shine. How will January end for cryptocurrencies?

In my Telegram channel, I ran an experiment dubbed “The January Effect” where I bought a handful of altcoins & shared my entries. Since Dec 31, 2022, the results have been dramatic. FET & SOL are top performers, and the avg performance is a 37% increase. Past 7 days in crypto: pic.twitter.com/1NEOlXTpV7

Follow @TonySpilotroBTC on Twitter or join the TonyTradesBTC Telegram for exclusive daily market insights and technical analysis education. Please note: Content is educational and should not be considered investment advice. Featured image from iStockPhoto, Charts from TradingView.com